Compete, a more trustworthy Alexa, released some data about the evolution of Google Docs, in terms of US traffic. From October 2006, when Google Docs & Spreadsheets was officially launched, the application gained more than 500,000 US users.

A chart from Google showed that the number of active users more than doubled after Gmail added a link to Google Docs next to some attachments in January 2007: 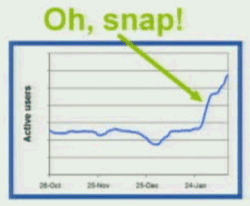 Another turning point was in June when Google improved the presentation of the document lists and started to promote Google Docs on the homepage.

One of the most important goals of Google Docs was to replace document attachments, especially in a collaborative environment. It didn't achieve this goal because Gmail still sends .doc attachments and not links to editable files available online. Google will probably try other ways to introduce Gmail users to Google Docs, including an option to upload files to Google Docs instead of adding email attachments. Another important integration could be with Google search results, especially with .doc/.xls files, that should become easier to read online. And the public documents produced by Google Docs should become available to search engines and easy to embed in a site, like the video below:

Update: ReadWriteWeb has some charts from Compete that compare Google Docs and other online office apps in terms of traffic. Google Docs is by far the leader, followed by Zoho and Microsoft Office Live, but the latter doesn't quite fit this category.
Posted by nesh at 5:15 AM