Last month, the online storage service Box.net added an obvious feature: integration with other services that edit your data. They called this OpenBox. "Traditionally with desktop software, all of your local applications had access to the same set of files and data on your computer. The web changed this paradigm because each unique application stores information on its own servers."

You might say that Box.net didn't have a choice: they didn't offer services for editing documents, photos or videos and it was convenient to open that data to application that were able to make it more useful. Google lets you store files in different services and doesn't offer an unified view for your files yet, but there's already some integration between services that store files and services that edit them.

While some Google services have APIs that let you access your files from other applications (Picasa Web Albums, Spreadsheets), it would still be better to select a list of third-party apps and add them as options in the interface. Maybe you want to open your documents from Gmail in Zoho Writer or edit your photos from Picasa Web Albums in Picnik. 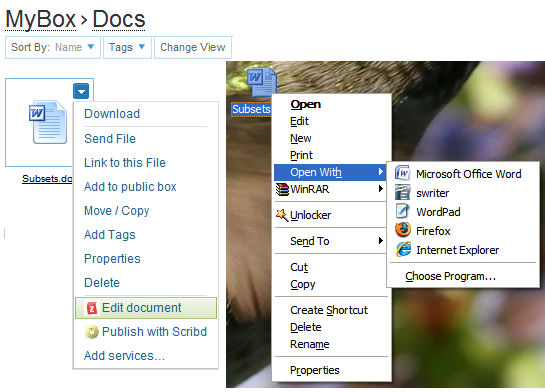 Today Flickr added the option to edit your photos using Picnik, but Flickr made that choice on behalf of their users. "The Picnik/Flickr collaboration works similarly to other 3rd party services who've built additional tools on top of the Flickr API: You'll need to pass through the step of giving the Picnik service permission to edit and save your photos… It’s a little bit like you're installing Picnik on your Flickr account, but with nothing to download."

The same way you collect Google gadgets, Facebook apps, mapplets, you could also add actions for different apps and make them more powerful.
Posted by nesh at 5:16 AM