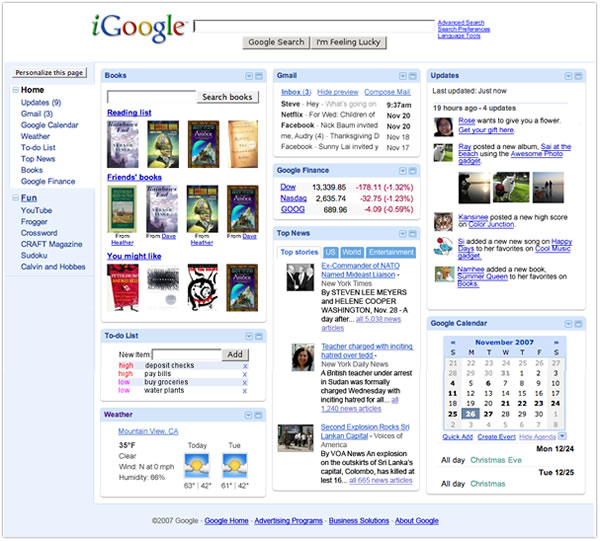 Google has a social network: orkut, but it's only successful in Brazil and India, without gaining too much traction in the US. With the launch of OpenSocial, an API for writing social gadgets, it was clear that iGoogle will play an important role in Google's second attempt to socialize. After all, OpenSocial applications are iGoogle gadgets with a social component.

Following orkut's model, iGoogle opened a sandbox for developers who write OpenSocial gadgets. The sandbox is probably a test for the next iteration of iGoogle: the personalized homepage turned into a social network. "The integration of OpenSocial with gadgets gives you an opportunity to enhance your content for users by incorporating social features. For example, a books gadget could display what a user's friends are reading, allow users to request to borrow books from friends' libraries, and show users books that their friends recently rated. As users share content with their friends, your gadget will naturally build a broad audience for distributing content and driving traffic," explains the new developer site for iGoogle gadgets.

iGoogle has tens of million of users, 50% of the users are from the US and it was one of the fastest growing Google products in 2006 and 2007. It's also the homepage for many Google users who want to personalize their experience by adding a theme and fresh information from the web. The new social component will not affect all the gadgets, so you'll still have gadgets for mail, weather or news, but some of the gadgets could share information with your friends. There's also a new canvas view that will show an expanded version of the gadgets, an integration with Google profiles and a newsfeed that shows your friends' recent activities.

Hopefully, the social component of iGoogle won't be too prominently promoted and people will be able to continue using the personalized homepage without dealing with friend invitations and viral gadgets. iGoogle will try to be the social connection between Google services, but this is a difficult mission for Google, a company that has never managed to build a successful social site.