orkut, Google's social network, added a lot of features in the past year to be more competitive and to become more popular outside Brazil and India. Google Trends shows that the interest for orkut is declining, but it's likely that some people no longer search for "orkut" since Google India and Google Brazil added the service to the navigational bar in December 2007. orkut has around 120 million users, up from 50 million users in April 2007, but Brazil (53.99% of orkut users) and India (16.91%) continue to be the countries where orkut is popular, followed by the US (15.13%).

orkut was one of the few Google services that didn't have a mobile interface, but now you can access orkut mobile at m.orkut.com. The simplified interface shows the most recent scraps, updates from your friends, a link to your profile and a search box for orkut users. The mobile interface lets you write scraps, get birthday reminders and respond to friend requests. You can also use shortcuts to access the most important sections of the page. 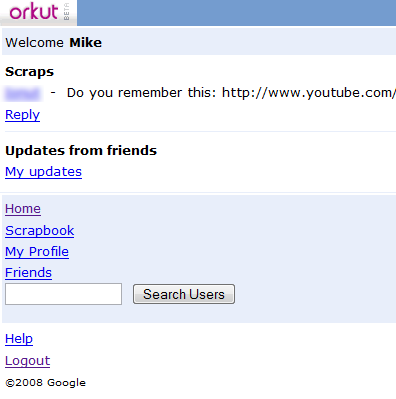 There's also a new version of orkut for low bandwidth that displays less pictures. orkut will automatically switch to this new version depending on your connection, but you can opt to use it in the settings.
Posted by nesh at 9:21 AM