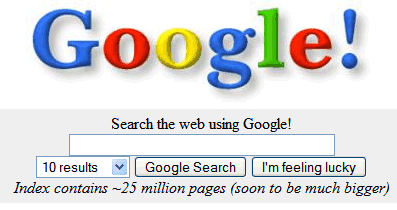 Google's homepage in 1998
The "I'm Feeling Lucky" button is one of the very few things that stand out on Google's minimalistic homepage. It automatically takes you to the first search result and it's helpful for navigational queries, when there's a single good result (e.g.: [Yahoo Mail], [download Opera]). The option was included in a slightly altered manner in Google Toolbar and Firefox: browse by name instead of typing URLs in the address bar.

Marketplace found more about "I'm Feeling Lucky" and its meaning.

"The reason it's called 'I'm Feeling Lucky,' is of course that's a pretty damn ambitious goal. I mean to get the exact right one thing without even giving you a list of choices, and so you have to feel a little bit lucky if you're going to try that with one go," tried to explain Sergey Brin.

"You know Larry and Sergey had the view, and I certainly share it, that it's possible just to become too dry, too corporate, too much about making money. And you know what I think is really delightful about Google and about the "I'm Feeling Lucky," is that they remind you that the people here have personality and that they have interests and that there is real people," said Marissa Mayer.

Even if only 1% from Google's searches bypass the search results page and go straight to the top result, Google will keep the strange button on the homepage as it has become a part of its brand. Probably the last time someone told you to click the button was to show you a Google Bomb: Go to Google, type in "miserable failure" and then press the "I'm feeling lucky" button (don't try, it won't work anymore). Or maybe you've seen the button in Picasa or iGoogle.

Jeff Atwood from Coding Horror thinks that the button is Google's number one UI mistake: "I understand this was a clever little joke in the early days of Google-- hey, look at us, we're a search engine that actually works! -- but is it really necessary to carry this clever little joke forward ten years and display it on the monitors of millions of web users every day? We get it already. Google is awesomely effective." 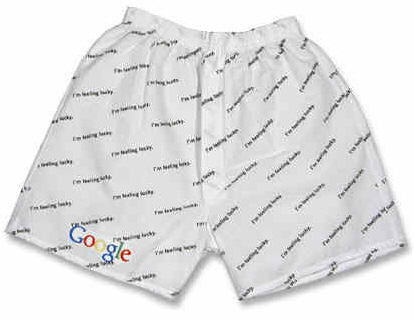 "I'm Feeling Lucky" boxers (limited edition)
Google will remove the button when you won't have to feel lucky to get the best results every time and when the list of links will be replaced with an actual answer.
Posted by nesh at 8:59 PM