Will GDrive Ever Launch? 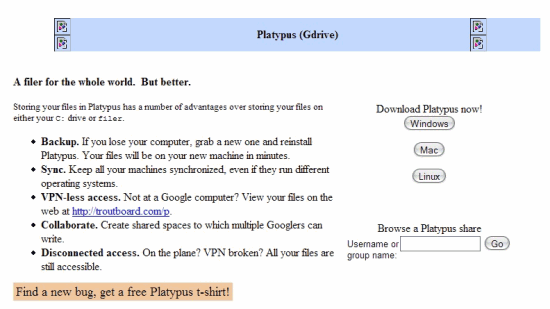 This is probably the year of Google's most important product launches. Even if they're much rarer than last year, they are strategically important (personalization, universal search, machine translation, the mobile platform, social gadgets).

Wall Street Journal reports that Google plans to launch a service for storing files. Of course, we all know about GDrive, an internal Google project, and Google's goal to store store 100% of user's data. "With infinite storage, we can house all user files, including: emails, web history, pictures, bookmarks, etc and make it accessible from anywhere (any device, any platform, etc)," mentioned Google in some leaked annotations from a presentation.

But WSJ's article could mean that GDrive's launch is close. "Google is preparing a service that would let users store on its computers essentially all of the files they might keep on their personal-computer hard drives -- such as word-processing documents, digital music, video clips and images, say people familiar with the matter. The service could let users access their files via the Internet from different computers and mobile devices when they sign on with a password, and share them online with friends. It could be released as early as a few months from now, one of the people said."

The article doesn't mention the amount of free storage that will be offered, but Google will probably use the same strategy from Gmail and Picasa Web: some free storage that should be enough for most users and paid storage for everyone else.

"Google is hoping to distinguish itself from existing online storage services partly by simplifying the process for transferring and opening files. Along with a Web-based interface, Google is trying to let users upload and access files directly from their PC desktops and have the file storage behave for consumers more like another hard drive that is handy at all times, say the people familiar with the matter."

The idea of mapping the online storage as an external drive is not new and you can already do this with tools like Gmail Drive or services like .Mac or Box.net. But Google really needs an application for uploading more files at once to Google Docs or Gmail, so the GDrive uploader could be useful to add files to a shared area, directly accessible from all Google services. Now it's difficult to upload files because there are so many different Google services that let you upload different kinds of files (documents, photos, videos etc.)

"Google is hoping the new storage service will help tie together some of its other services through a single search box, says one of the people familiar with the matter. So a user might be able to conduct a single search by keywords to find his own privately stored files, regardless of whether they're accessed through Picasa, Docs or a software program running on the user's computer."

Hopefully GDrive will bring enough free storage (AOL's Xdrive offers 5 GB for free), a simple way to transfer and synchronize files, integration with Gmail, Google Docs and other Google services. If Google actually decides to launch GDrive.
Posted by nesh at 7:31 AM