PayPerPost, an ad network that pays bloggers for writing product reviews, reports that some of the sites that use its ads have been punished by Google. "Last night Google decided to go after some of the bloggers in our network, reducing their PR from whatever they previously had to zero."

The main reasons why a company pays bloggers to review a product is to get backlinks from relevant sites, as you can see in the beautiful ad that begins this post: "buying reviews for links is the newest way to build links". Paid links artificially increase the PageRank of a site as they're no longer genuine votes for web pages.

It's not the first time when Google drops the PageRank to 0 for a site. "By the end of 2001, the Google search engine introduced a new kind of penalty for websites that use questionable search engine optimization tactics: A PageRank of 0. (...) Characteristically for PR0 is that all or at least a lot of pages of a website show a PageRank of 0 in the Google Toolbar, even if they do have high quality inbound links," explains eFactory.de.

PageRank is the initial innovation that made Google a popular search engine: it introduced a query-independent way to determine the importance of a site. Here's Larry Page's description from the PageRank patent:

Intuitively, a document should be important (regardless of its content) if it is highly cited by other documents. Not all citations, however, are necessarily of equal significance. A citation from an important document is more important than a citation from a relatively unimportant document. Thus, the importance of a page, and hence the rank assigned to it, should depend not just on the number of citations it has, but on the importance of the citing documents as well. This implies a recursive definition of rank: the rank of a document is a function of the ranks of the documents which cite it. The ranks of documents may be calculated by an iterative procedure on a linked database.

The interesting thing is that every web page has the right to vote by linking to other pages. But what happens when a very popular site starts to abuse its power and charges money for placing links? Should you continue to trust its votes?

Here's how Google Toolbar describes the PageRank feature. "Wondering whether a new website is worth your time? Use the Toolbar's PageRank™ display to tell you how Google assesses the importance of the page you're viewing." Google Toolbar is the only official way to find a truncated value for PageRank (the real value is a percentile), but there are many sites that query Google's servers directly. PageRank is now one of the more than 200 signals used to rank webpages, but it's still a measure of authority.

Back in September 2005, Matt Cutts explained the relation between text links and PageRank:

A natural question is: what is Google's current approach to link buying? Of course our link-weighting algorithms are the first line of defense, but it's difficult to catch every problem case in adversarial information retrieval, so we also look for problems and leaks in different semi-automatic ways. Reputable sites that sell links won't have their search engine rankings or PageRank penalized – a search for [daily cal] would still return dailycal.org. However, link-selling sites can lose their ability to give reputation (e.g. PageRank and anchortext).

What if a site wants to buy links purely for visitor click traffic, to build buzz, or to support another site? In that situation, I would use the rel="nofollow" attribute. The nofollow tag allows a site to add a link that abstains from being an editorial vote. Using nofollow is a safe way to buy links, because it's a machine-readable way to specify that a link doesn't have to be counted as a vote by a search engine.

In April, Google introduced an option to report paid links and last month SearchEngineLand obtained the confirmation that "PageRank scores are being lowered for some sites that sell links. In addition, Google said that some sites that are selling links may indeed end up being dropped from its search engine or have penalties attached to prevent them from ranking well." Also, Google's help center mentions that "buying or selling links that pass PageRank is in violation of Google's webmaster guidelines and can negatively impact a site's ranking in search results." 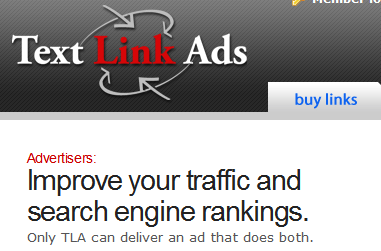 From deceiving search engines by using hidden text, keyword stuffing to participating in link schemes, those who try to manipulate search engine rankings adapted. And search engines must react to remain relevant.